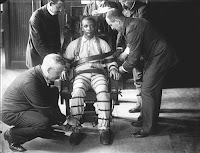 Oh how I wish I had pictures for you.

But today I want to tell you all about... Mr. Hot Seat *dun dun dunnnnn*

Mr. Hot Seat is a dear old friend of ours. He was created by my father back when I was about 6 years old (give or take a few years) for his youth group (yes... yes I was the seat tester, and I thought it tickled). Apparently he needed to zap some Jesus into them, or at least give them some type of incentive to remembering their Bible trivia.

Anywho - let me paint a picture for you of who Mr. Hot Seat REALLY was:

He began as a small, humble wooden chair. Number 23, I believe (don't remember the actual number written on the back of it, but let's just go with it, shall we?). But it wasn't long before his true calling was discovered.

My father placed two slender metal strips (about 1'x4') on the seat of the chair, right around the middle, running front to back - right about where your "buns & thighs" would align on the seat.

But beneath the surface of the chair - that's where the magic happened.

The metal strips were wired to a big square 6volt lantern battery (not your typical little 6 volt, mind you), which was then, in turn, wired to a small button that could fit easily into the palm of your hand for comfort and ease of use.

The selected victim - umm... I mean eager volunteer!? - would step up to the chair. Now, if he was slick enough to try to wear jeans, this is where my mom would unload on his rear with a super soaker... you know... so he can REALLY feel it. ;-) And then, the no-longer-quite-as-eager volunteer would have a seat.

Upon sitting, the volunteer usually floated for a moment... lingering over the metal strips and trying not to touch them, yet... slowly easing down and onto the strips, for fear of a sudden shock upon contact. This rarely happened - and when it did, it was just because Dad, or whoever else held the button of power, really just wanted a good laugh. When the "volunteer" finally sat down, the explanation of the game began.

At this point, many volunteers are shaking so badly that they are imagining that they have been zapped and jump from the chair. They have not been zapped - it is all part of the psychological game. :-)

The game went on. Usually, in every crowd, we'd have a few people that quit part of the way through, for fear of pain (it didn't hurt... it was like getting shocked when you tough the car, but on your bumm), or would jump out of their seat right before being zapped, as soon as they realized they had the wrong answer. We'd have people who, when asked personal hygiene questions, would just answer Yes to everything, to avoid losing concentration (even if they were asked 'have you stopped showering since your last birthday' or 'did you forget to put on deodorant today'). Then there'd be the typical two - most people fell into the following categories: the Base Jumpers, and the Hard headed jock.
You did not have to be a Hard headed Jock to fall into this category. It usually just meant that the person either a) didn't feel a thing, or b) pretended not to feel a thing in order to seem tough. These people are boring, and usually kicked out of the game because they are no fun. And they also usually got an extra super soaker squirt, just for fun, as they walked off the stage (momma didn't like these guys).

To be a Base Jumper, you either a) have an extremely heightened sense of dramatic flair, or b) haven't been spanked enough as a child, thus resulting in complete sensitivity of the gludious maximus (in our youth, it was mostly the latter of the two). The Base Jumpers were our favorites.

THIS is why Mr Hot Seat was created. This is what he lived for. This is what my father lived for (explains a lot about my childhood, actually - if you know my or my sisters... you'll understand).

The Base Jumper was sometimes also skiddish, but often times totally taken by surprise, as they thought they were going to be a Hard headed Jock. Upon answering the question incorrectly, or going past the time limit, the Base Jumper would SKYROCKET from the Hotseat, and grab their bumm tighter than skinny jeans on Tommy Boy. *aaannnnd queue intense burst of crowd laughter*

Now, I haven't quite figured out why, yet, but there always seemed to be another volunteer, even after witnessing a Base Jumper's reaction. Again - explains a lot about some people.

This bring me to the highlight of hotseat night - the Circle of Power!!

The Circle of Power was a very simple concept (I highly recommend removing all rings, and metal jewelry before playing this particular game). Everyone stood in a circle (including Mr. Hot Seat) and held hands. The two people on either sides of Mr. Hot Seat (usually selected Circle of Power veterans) would then place their hands on the metal strips and brace themselves. Others in the circle, especially the newbies, had no idea what was coming to them. Upon counting down (and sometimes... my dad didn't wait until he finished the countdown, but would get excited and press the button at "3"). Suddenly, the power of the hotseat shot through everyone in the circle. The Circle could NOT be broken!! If anyone let go of anyone else, it didn't work.

The button would be held down until someone broke the circle - so imagine what it looks like... faces scrunching in pure intense discomfort, held-hands curling up like pigs tails, and people bending and pulling in shear mental agony! It was NEVER as painful as it looked, which is why we had to convince the newbies to try it on the first go around... otherwise they would never try it... EVER!!!

***disclaimer - for those of you completely and totally ready to file a lawsuit against my father, he ALWAYS ALWAYS ALWAYS prevented anyone with a pacemaker or in ill health from playing this game (and yes, we did have a few in said conditions that wanted to try it anyways). He was very a responsible man.***

HAHAHA!!! I am dying!!! I am literally picturing base-jumper Steven...everytime man!! And then there was Izzy...he was a hard-headed jock...OH man Mister Hot Seat...you rock!

I used to attend Heritage. You may not remember me, but I have known you since you were 3 or 4 when I first started at Heritage. BTW, I found your blog via your sister, April. Anyway, I tried Mr. Hot Seat, one time. I was in fact a base jumper...I fully admit it. But it was fun to have that laughter and even extra squirt from your mom. Those were good times. Thanks for the memory!!

Hahahahaha. Sarah Puhl. You make my days brighter. I can picture everyones faces in the circle hahaha.