I mentioned before that we're planning to renovate the Laundry Nook downstairs. I worked with my sister, April, to create a mood board, and I'm super excited about it!
We'll start with the layout of the laundry/mudroom area: 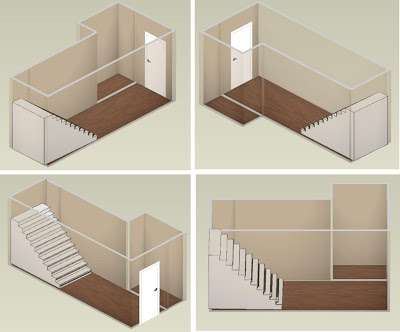 That's a basic idea of the layout of our laundry room (just imagine a window in that door - it leads to the outside). While looking at this (we'll call it a rough before picture), imagine ugly green marble-ish vinyl tile, and really old dated appliances. Now add a few cob-webs (we avoid this space if at all possible) and some yellowing on the ceiling and door. That should do it!
Moving on.
Remember how I mentioned that my sister helped make a mood-board for me? Well, I tend to enjoy drawing things out for dramatic effect, but I think I've done that enough for one day... or have I?
Okay okay, without further ado - here she is! (If you click the pictures, you should be able to see them enlarged.)
Isn't this exciting?! I can't WAIT for the finished product. Should only be a few weeks (depending on availability and free time, that is).
Alright - that's enough excitement for one day. I would LOVE to hear what you all think of the plans (and I'm sure April wouldn't mind hearing what you think of her awesome mood board).
PS: If you have any advice or recommendations, BRING 'EM ON!!

McStudly and I are expecting our tax return any day, now. Actually, it'll be deposited on the 12th, according to the e-mail we received after we e-filed.

Where in the WORLD (is Carmen San Diego!) has the past month+ gone?? Oh my word, I never intended to take that kind of a blog-slacker-"vacation", but it happened.

I'm officially a bad blogger (not that I was all that fantastic to begin with, if I'm being honest... but hey - it's my blog, so we'll just go with it, mmkay?). Really, though - what happened to me??
Oh THAT's right. Work got completely nuts, on me... as did my schedule outside of work... and then there's that marriage of mine that I'm trying to maintain... and a house to at least attempt to keep up with (which I'm not all that fantastic with due to the other bazillions of things). Mix it all up, and what do we have? A pretty good excuse for skipping out on the not-so-necessary stuff, like blogging.
Well, needless to say - a lot has been going on. Unfortunately, I can't write about a lot of it because, even though this is my blog and it's for my personal babbling, it's not really all that personal. And as much as I love being honest and up front, I'm not really one of those people that can put something out there, knowing it could hurt some one's feelings if they read it. So we'll be keeping a whole lot of stuff off the blog, BUT I will give you some good stuff to hopefully make up for it.
So where have we been - Ah yes. Christmas vacation happened - it was fabulous! But of course was over way too quickly. There was some confusion in our return date and we ended up staying a day longer than we all originally thought, but ah well. It was much needed (we were already packed up and got to purely relax the next day... ha ha!) and much enjoyed. I really enjoy getting to spend time with McStudly's family and look forward to his mother hopefully coming to visit us again sometime soon (woot woot!). :-)
Then there was New Years. The FIRST New Years Eve that McStudly and I could finally spend together... and we didn't. :-/ I was bummed, but ah well. I guess I'll get over it. He went to a party with our Young Adults group at church, and I helped out with the Youth event (which was awesome, btw) at church. I was POOPED afterwards... ask any of the other leaders. It was nothing but evident on my face. I am SO glad our Youth pastor doesn't do lock-ins or all-nighters. (Plus, I just realized that I may officially be an "old fogey", now, with that statement... Nice!)
Birthdays! Mine wasn't super fantastic, but it wasn't horrible. I actually had a great time going out to dinner with some ladies from church. It was nice! Just a couple ladies that I enjoy being around and some food that I love Love LOVE! So, good times. McStudly's birthday was pretty uneventful... well, there was a football game and some guy time while I hung out with a pal, and then we went out the next day (thanks to a nice and needed holiday from work) to celebrate together, just the two of us. Good times, again!
Let's see... what else is there...
Ah yes - the Clinic! Remember way back in THESE posts when I said I was going to train to be a volunteer counselor for a Pregnancy Clinic? Well, I did. And I am. It's a pretty long process, but I am LOVING it!! I'm not almost up to week 5 of my internship. There's SO much to learn, but thankfully I have an amazing Senior Counselor that I'm shadowing. She really is great. I'm learning SO much and with every session that I observe and even the ones we just discuss, I get more and more excited about the work we're doing. And I'm seriously amazed with how much information I'm picking up and absorbing. *sigh* It's really great.
Well, I can't think of much else to catch you up on, currently. Wait - that was a lie. I have plenty, but to be honest, I'm tired and have quite the headache. Not a fun combination, especially when you and your husband have an agreement to go to bed together and he's in the middle of a very intense (as opposed to...??) video game online. I do have some things I'd like to think out and type up to clarify, but I don't think it's going to happen right now. Perhaps being snowed in will give me the chance to do a bit more of that?
...then again I have a LOT that I could be getting done around the house...
...nah!