Gettin' Down to Business

So after calling the Insurance company Thursday evening, we had QUITE the quick response. Our Adjuster called McStudly Friday afternoon, and they had someone at our house Saturday morning.

They came in and we quickly discovered that the damage was even worse than previously thought. I'm SO glad we called them!! So we signed a few papers, wrote a check for $250 (thank GOD I set our deductible as low as possible), and they got to work. And by work, I mean they began wreaking havoc on my poor little house. :-(


BUT... there's a little twist in our story - Do you want to good news first, or the bad news?


Okay, fine. We'll start with the bad news and get it out of the way.


They brought in these mega jumbo-fans to "dry out" the house. In our tiny little two level, 2 bedroom 1.5 bath townhome, we are the current foster parents of 9 of these bad boys... AND two huge-mongous dehumidifiers that seem to have the power to suck the blood RIGHT out of my body, through my nose, of course. ...stupid little devilish heaven-forsaken pieces of you know WHAT!! *gathering my wits*

We were told we had to keep these puppies on for 3 days. 3 FRIGGIN DAYS!! *sigh* So they've been on. And let me just say how much sleep I got the first night: 0 hrs. 0 minutes. and possibly about 27 seconds. Yeah... NADA!! I tried going to the spare bedroom, the only haven I currently have in this place. Nope. Didn't work. I went downstairs to sleep on the couch. Nothing. Okay - that is where I finally got the 27 seconds of sleep. Oh Emm GEE!! I was a BASKET CASE that next morning (just ask McStudly... he'll tell you, I'm sure). ha ha 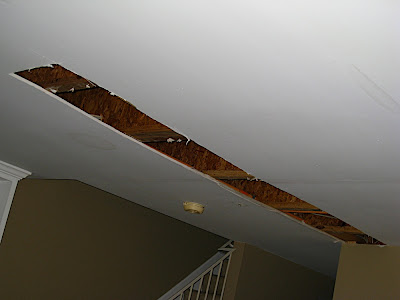 The giganto-hole in our ceiling to dry out the rafters. 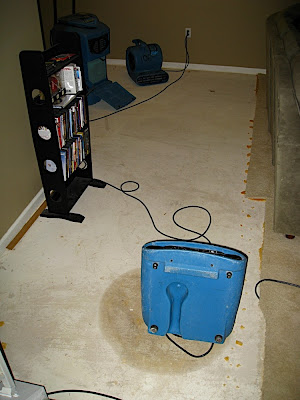 The lack of carpet where my dining room once lived. 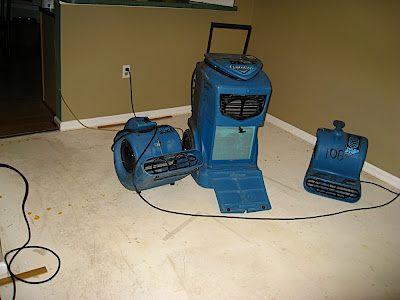 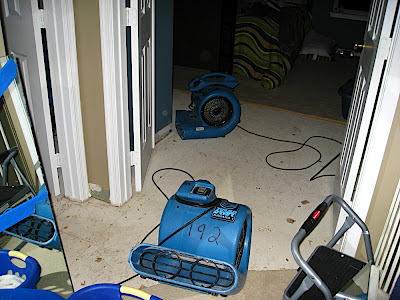 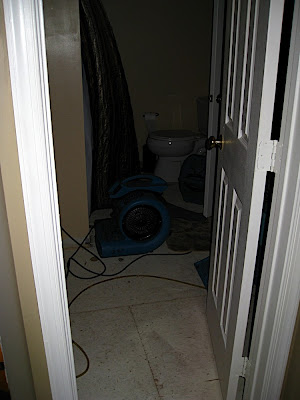 Our successfully remodelled bathroom - the entryway. 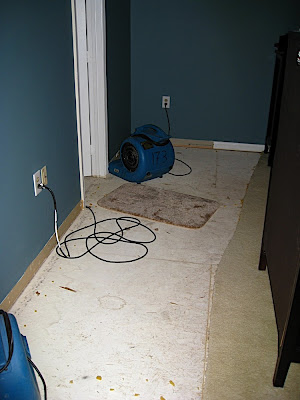 A sidewalk in my bedroom?? 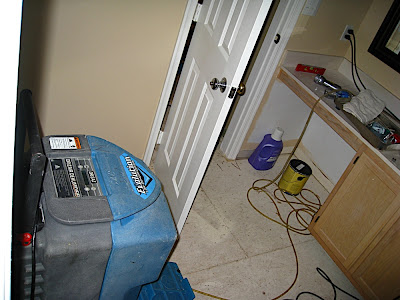 Papa dehumidifier dwarfing the size of our bathroom. 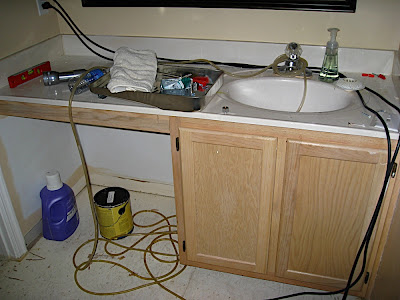 At least they left the throne in for us. 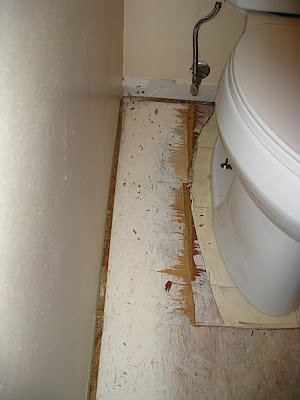 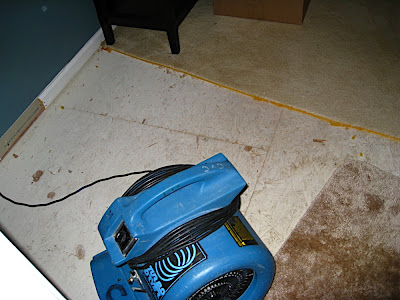 One of the foster children at play. (This one's name is Moe) 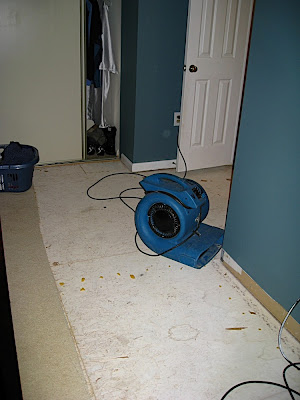 Stanley counting to 10 before going to find the others.

So, yeah - that's the bad news. It's ugly. It's giving me a headache (literally... all the Claritan and Excedrin in the world cannot work as well as just leaving my house, right now. It's totally ridic!


Howev', there is a bit of a silver lining, and then the good news. Are you ready for it??

We finally got the spare bedroom organized!! If I had a before picture, you'd be thrilled. It looked like one of those storage places you can rent month-to month and put whatever you want in it. Seriously. It was so stressful that we only ever went in there to get Austin in and out of his crate. That was it. It. Was. Awful.

Although it's not "finished", it is SO many leaps beyond what it was (sorry... forgot to take before pictures!). So, now it looks like this: 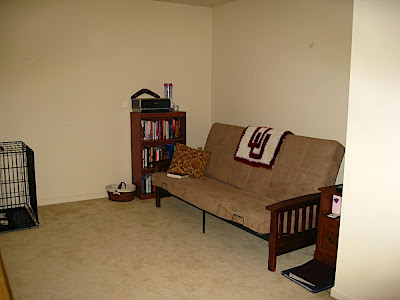 Our pretty new futon that took a degree in Rocket Science to put together. 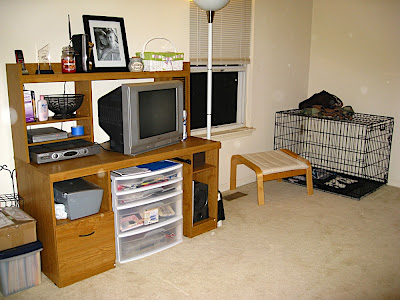 The desk that was left with the house... eventually we'll move the TV onto an entertainment stand and actually use this baby for our computer... but that's down the road a bit, since for now we have a laptop. 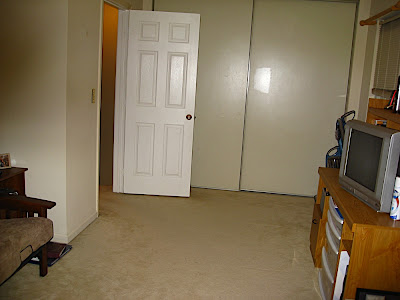 That fun shiny spot on the closet door (which hides all of our boxes and other things until the attic is done) is where the previous owners thought they could "touch up" the off-white doors with white primer. *sigh* 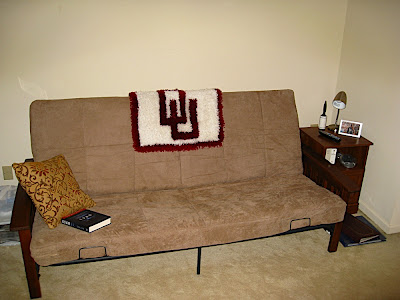 This is currently my FAVorite spot in the house. Seriously... and a copy of "Adam" by Ted Dekker - the book I plan to start reading as soon as I can get a minute to relax! And yes, we are OU fans - GO SOOOONERRSS!!!

I know this is what you've been waiting for, so I'll get right down to it. Because of the little mis-hap, those guys came in Saturday morning and started firing off all kinds of what-if's and kinda-sorta-maybe's and were very nice to answer any questions we had. Well, they started out by telling us that they had to remove the padding from under the carpeting, because it was have to be replaced, to avoid molding, etc. Fine by me. And I just through in a "If you want to take the carpet, too... by all means, you will not be breaking my heart!"

This carpet that came with the house is nasty!! It's got this dark ring all around the edges of the rooms and it's not quite the color it was originally (thanks for Mrs. Smoker that sold it to us). We thought we'd try, ya know? But the guys told us that "unless there is furniture stains, from the water, or delamination under the carpetting, we can't replace it. But I'll see what I can do to work with you all..." Whatever that means...

A friend of mine (Thanks Renee!!) came over to help me load up the Escape and make a dump and Goodwill run. When we returned... that's when I got the awesome news!!!

That ooogly laminate flooring in the bathroom? Yeah, we had planned on eventually tiling and whatever whatever. Well, they have to replace the laminate in there, now. SO - instead of having them put in new laminate, we can just pay the difference in cost, buy the tile, and have them tile it for us. SCORE AGAIN!!!


So that's awesome, right? One little "oopsie" (little is DEFinitely an understatement...) by McStudly and we get new carpet, new tile, new baseboards, and a freshly painted 1st floor ceiling all for only $250 and some change. How sweet is that?? Yeah - I'm pretty stoked. Or at least I will be once it's all said and done with.


So for now, McStudly's grandparents are staying with us starting tonight and they've already seen the damage to the house. They're so laid back they just laughed and said it was fine. "We've lived in worse. Don't even worry about it!" How great are they? *sigh*

So I'll keep you updated on the status of things, and let you know how it all turns out. They probably won't start doing any of this stuff until the grandparents leave on Thursday. Until then, we'll keep relying on our bathroom-rug walkway (you can see in the above pictures) and looking forward to finally turning these beasts off Tuesday afternoon.


Oh!! I almost forgot to tell you!! Since they are going to tile the bathroom for us, and the new vanity we planned to purchase down the road will be a full two-sink vanity, not this weird on with the open area underneath, we're going to go ahead, bit the bullet, and buy the new vanity and sink-top as well. Just get it over and done with already!! We'll definitely be taking a BIIIIGG break from ANY home remodelling in the near future once all of this is finally completed, but our house will definitely be a-buzzin' for the next week or two. THAT is pretty much all we can count on at this point.


Well, that's the update on the whole sitiation (pr: sit-chee-AY-shun). What do you think? Wanna sign up and do one of those "house swap" type-a deals? No? Well you're sure missing out!

Labels: chaos, figuring it out, fixer-upper, home sweet home, making a mess, remodelling, woe is me

Monk, SOOO happy for you two!! Isn't is awesome how God can turn something catastrophic, to something He uses to bless us!!

How great is the God we serve that He cares about even our home improvements!! (ha. among allllll the rest)

Oh gosh, so sorry! At least there IS good news, right?;)

wow! I can't even imagine. But, I'm glad you can see the positives of the new carpet and tile! Just wish it didn't have to happen like this for you. GL getting some sleep and yay for understanding family!

Wow, such a crazy mass of fans! I don't envy you living in all of that, but you're going to love the end result, I'm sure!! God is good!

wow, good thing there is a great silver lining to the whole event!

So I've been reading all your blogs about this little mishap and it's so tragic it's comical...honestly, I had a little movie playing in my head the whole time...lol...I'm glad things have turned up for you though, that would stress me out to no-end. I can't wait to see pictures of the new fancy house you'll get though :) Yay for insurance :) :) :)

WOW...but WOW. (both good and baby WOW's) It's going to look AWESOME!!! How much will this check off on your list of things to do! haha :)

So, a total nightmare with a good ending huh? Sorry you are having to deal with it all but it sounds like it has a happy twist to it!

Go get some sleep!