So it's been a while since I wrote anything about McDog (that's Austin, by the way... he's got WAY too many nicknames to list, and some too inappropriate to mention in a public forum such as this). He's been doing pretty well, but with the weather being like it has, and with the STUPID FRIGGIN DEVILISH cold weather (can you tell I'm not a fan) that is forcing us into submission, he hasn't had like ANY time outside lately. And honestly? I think he's okay with that. I mean, sure - he'd just LOVE to be gallavanting around with some other dogs at the dog park down the street, but he doesn't seem to like the cold much, either, as evidenced by his UBER short potty breaks outside (he IS a shorthair, people, and I'm not a big fan of doggy clothes, if purely for the hatred I have for wrestling my dog into them).

Before you feel too bad for him, he did get a trip to the dog park when McStudly got off work at o-dark-thirty this morning (thanks for that, by the way, crazy Air Force scheduler dude... really appreciate all the nights that I have to sleep alone *intense sarcasm intended*).

Anywho - this is just an excuse for me to get to post a few pictures of my handsome pup. Isn't the hottest dog, ever (for the record, my husband is the one that calls him "hott"... I'm merely repeating what I hear over and over and over again)?! 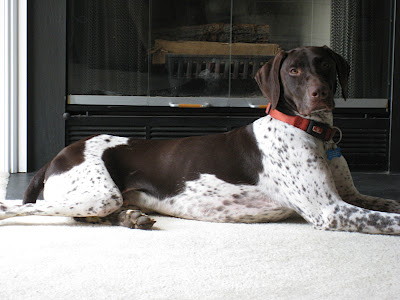 I think this was one of maybe 2 times in his life that he's sat still for more than 30 seconds at a time. So glad I had a camera to capture it on film, or there's NO way McStudly would've believed me! 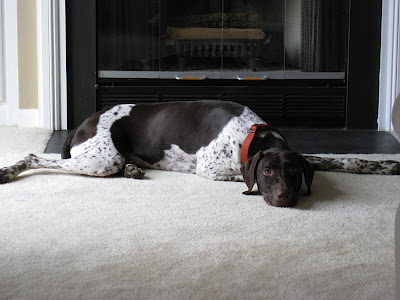 Isn't he a cutie-pa-tootie?! (emphasis ont he "tootie", by the way) 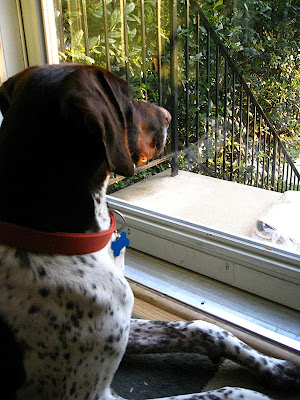 Waiting anxiously for McStudly to get home... talk about a daddy's boy! 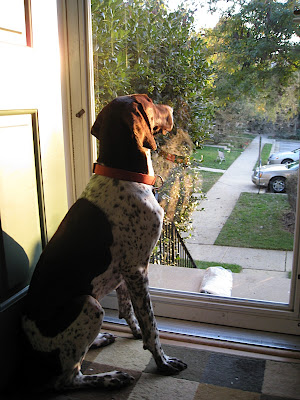 Such a proud dog, sitting up straight and what-not.

he's SO hott. And what great posture he has! lol

Oh he IS SO CUTE!

I love pointers! They just look so stately and regal.

As opposed to my dogs that look like a homeless man dropped them off on my front porch....

Glad you finally came out of the blogging closet! I'm loving reading your blog!