Years ago, I used to go to an annual Youth conference called "Premier Winterfest" with our Church Youth Group. It was a blast! It was a Friday through Sunday morning kind of thing and you stayed in a Hotel along the beach in Ocean City (in February, though...) and went to services and had a BLAST! It was SO much fun that even after I graduated High School, I stayed working in the Youth as a leader, and would go as a chaperone. Yeah - it was that awesome.
Most of you have probably heard of such events, if you haven't attended one yourself. Every year it was different, but somehow the theme involved being "Hungry": "Hungry for God", "Hungry for More", "Still Hungry", "Starving for Jesus", "Dying of Starvation", "Seizing for Spiritual Food"... (okay, so I made those last 3 or 4 up, but that's what we were all starting to think!)
Well, along with awesome speakers and amazing worship, we always had a concert on Saturday afternoon. One particular year, Tait came. That's right - Micheal Tait, in all of his former-DC Talk glory - along with his band, came to OUR youth event! It was fabulous.

The best part? It went something like this:
*dusting off an old memory*
Micheal Tait began his set by coming out to "Electric Avenue". You know... that really funky old song? Yeah - it was rockin' good times. (I sound like I'm being sarcastic, but I'm not - it really was good!) Then he sang another two songs that some of us knew, but not all of us... and then finally he decided he wanted to pull some people up on stage to sing with him.

Anywho - I start jumping. My volleyball skills, that somehow were never really present when I actually played volleyball, kicked in and you'd think I was spiking balls into the face of the 2008 Summer Olympics. (I found out later that my sister, and possible a few other people, were actually assisting in my "air"... but I didn't know this at the time)
Long story short - I GOT PICKED!!!! It was FABULOUS!!! Seriously, though. I got to run UP onto the stage and SING with MICHEAL TAIT!!! Check it out: 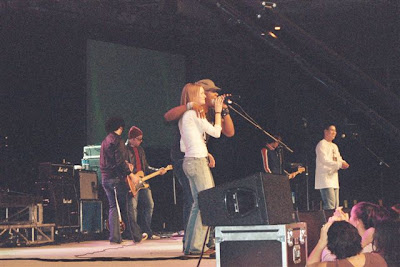 They start playing "Blessed Be Your Name" and he picks some guy out of the audience. The picture above his him introducing me. (I know it looks like we're fighting over one microphone, but he's actually holding a cordless in his hand) Then they began playing the music, and I was supposed to sing the first verse. I ROCKED it!! And other than trying to harmonize with MT, when he wasn't singing, like I thought he was going to, it turned out AWESOME!! Then comes the second verse. He goes over and introduces Dingbat... (Oh - I'm sorry. I forgot his name) and then tells him to sing the second verse. *Insert goofy look here* He didn't know it! So MT said something along the lines of "Take it, Sarah!" And I sang the second verse, too. Then we harmonized over the chorus and bridge. It was a ROCKIN' good time!! 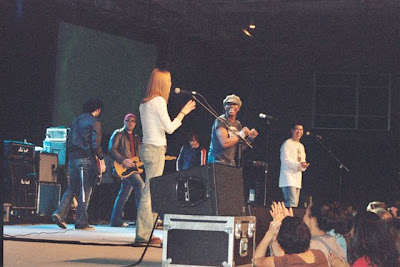 uh...it was all me...just me. Your sister thrusting you into the air...and I was using the belt loops on your jeans to do so :)

Great story! That is sooooo cool! I attended Creation Music Festival when I was in high school, sounds like something very similar.

Love your nickname for your hubby too, very cute. :)

SO AWESOME!
I know you rocked, girl!What a cool story.

Gotta love family that lifts you up. LOL.

OH MY GOSH! I'm DYING here! Just DYING! Premiere! Ahh. Mine were the days of the Lancaster Host but magical nonetheless. DC Talk came one year and I stalked the door and got in to "help" put programs on the chairs, meet the guys (briefly) and listen to them do a run through. OMG OMG they were my fourteen year old hearts dream COME TRUE! Thanks for the jaunt down Memory lane!