I almost don't even know where to begin. If I seem a little spotty, please forgive me. My mind is in about 5 gazillion places, right now.


So as many of you know, we've been doing some home-remodelling lately. We've hit bump after bump in the road, but things were finally progressing. So imagine, if you will, that we've finally taken about 5 steps forward. Well... now think 8 steps back.


My Husband has been living the "Manly Man" dream in wanting to do things himself. I'm not allowed to do them, but it's not due to any fact other than he just wants to be able to do it. Fine. Whatever. I've got PLENTY of other things to do around the house...


Yesterday, McStudly had plans to install the new light into our bathroom. That's fine, but I couldn't keep myself from worrying - so I called.

Honey, I know you're going to laugh at me, but I just have to say it - please don't forget to turn the breaker off before you install the new light.

Okay - that's fine. I just had to say it. Laugh at me if you want, but I feel better.

Well, apparently it shouldn't have been... in installing the new light, he ran into a bit of a snag and had to make a home-depot run in order to take care of it. While at the Home Depot, he decided to go ahead and purchase a new shut-off valve for the water supply to our new toilet, since the old one was, well, old and needed to be replaced anyways.

Upon arriving home, he decides to switch jobs and install the new shut-off valve instead. (Some of you probably see what's coming. Unfortunately, I didn't know what he was doing, or I would've said... well... you'll figure it out)


Apparently, Mr. Manly Man himself forgot to SHUT OFF THE WATER!!! He thought that shutting it off on the shut-off valve... the one he was replacing... would shut all of the water off to that pipe. ???


Natural reaction - he sticks his finger in the pipe. I don't blame him. I would've done the same thing... oh wait... no. No I wouldn't have.


ANYwho - he has his finger in the pipe and calls... My Dad. Mr. fix-it-yourself. Probably the best choice, really. So he finally figures out that he has to take his finger out and go shut off the main water... but he doesn't know where it is.


He runs down to the utility closet... then down to the basement and finds three water lines. Shuts ALL 3 of them off. (again - probably the best choice, at this point) But, by this time it had been probably around 5 minutes since "the incident" started. So you know what that means...

So I happen to call, and he answers the phone like this:

What? You did what? WHAT HAPPENED??

Would you PLEASE tell me what happened?!


As he starts to relive what happened, I BUST out laughing... what else can you do? But then he tells me how bad it is.

As you can imagine, 5 minutes is a LOOONG time to have water BURSTING out of an open pipe. It was ALL over the place... literally. 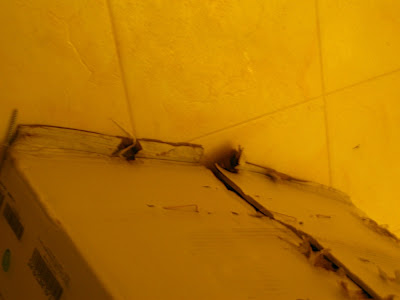 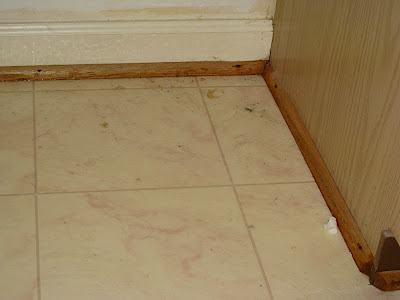 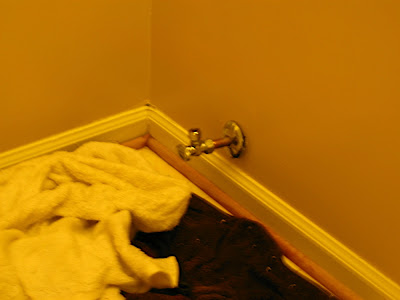 (with the new shut-off valve finally in place) 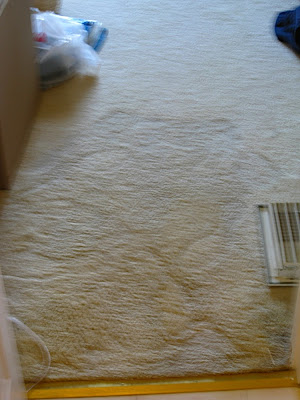 Hallway - carpet completely wet and soggy outside of the bathroom door 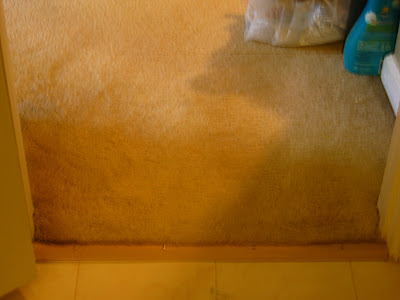 *sigh* I wish that was where it ended. 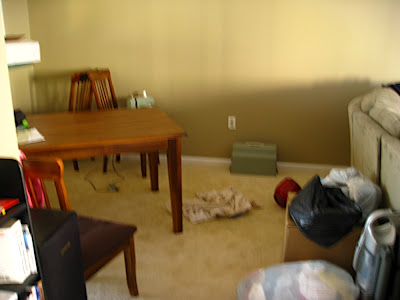 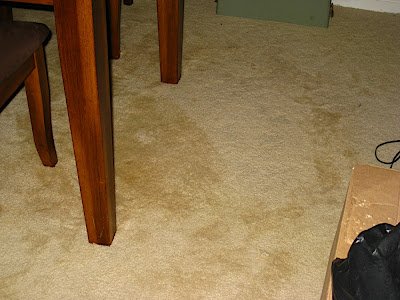 Utilities closet - it's raining men in there 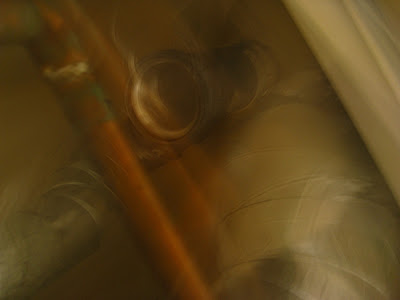 
Living Room - let's just say you can see all of the seams of the dry-wall on the ceiling. AND where any screw-holes may have once existed. 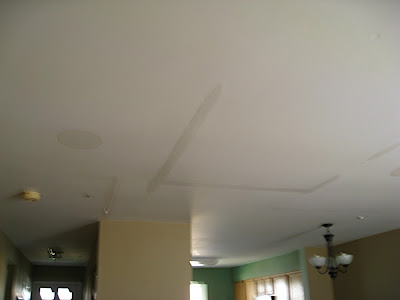 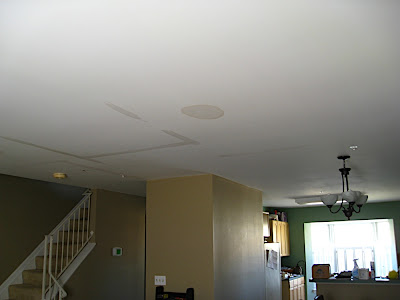 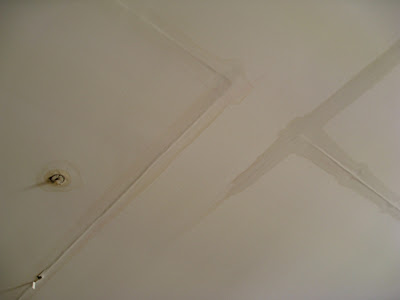 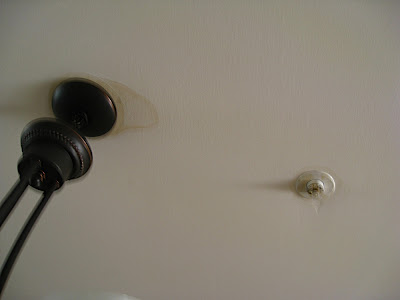 (the chandelier and one of the sprinkler heads) 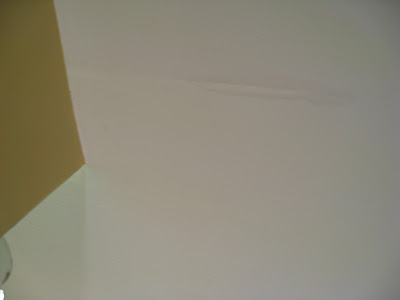 (the cieling where the dining room meets the kitchen) 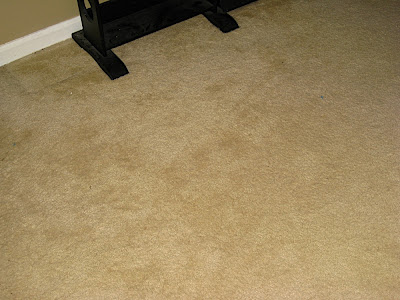 (the floor next to the utilities closet)

Now, McStudly WAS quick to not only turn off all of the water, but also flip the Main Breaker to the entire house. Than the Lord... I didn't need him getting electrocuted on top of all that had already happened (which was my first concern when he answered the phone the way he did and sounding all delirious).

Our HomeOwner's Insurance will be earning it's keep in the near future, that's for sure. Unfortunately, there's no way it'll be done by... TOMORROW, when his grandparents fly in!! But at least they're not staying with us until Monday evening. We'll have a few more days for clean-up and getting the house livable, again.

I'm just glad it was nice outside. A neighbor's kid ran the dog while we cleaned up and when we checked to make sure we wouldn't get electrocuted, we cut the power back on so I could cook some dinner.

On the plus side - the new light is almost installed int he bathroom, and the new toilet (and shut-off valve!) has been installed. I also got a lot of re-organizing and re-arranging in the spare bedroom while McStudly, a Neighbor Man, and Papa Bear worked.


Oh yeah - AND it looks like I no longer need to mop the bathroom floor!! :-P

Labels: getting it done, holy goodness, home sweet home, is it over yet, McStudly, Neighbor Man, oh man oh man, Papa Bear, remodelling, water everywhere, woe is me, you've GOT to be kidding me

Oh goodness! How crazy. I'm glad that everyone is alright though. What a pain.

OH - MY - SWEET - JESUS! Oh dear sweet Sarah. Boo hoo, boo hoo, boo hoo. That's me crying for you. You have TRUMPED ALL my home remodeling snafoos INCLUDING painting the kitchen cabinets with the FLU! What a disaster. I am so sorry. What a tremendous mess. I get messes and almost loosing your mind over the difficulty of some projects but this just takes the cake. I won't complain again- until maybe next week at least ;)

Oh Sarah....wow. That is so something my husband would do. He likes to pretend he is handy but well, he has other strengths, let's just put it that way.

I hope it all dries out soon!

Oh lordy girl that is a TON of water!!! I'm sure you already thought about renting a carpet shampooer to pick up the water in the carpet? Carpet can mold super quickly.

If not, I would seriously consider it.
UGH! What a mess! But you're right, THAT is what insurance is for!

Oh my goodness, I'm so sorry! And I'm so sorry the ribs and potatoes didn't turn out well. :o( Please try the potatoes again sometime, now that you know to cook them longer. They really are easy and so yummy!! Sorry you didn't have a great experience with everything.