A while back I made this dress: 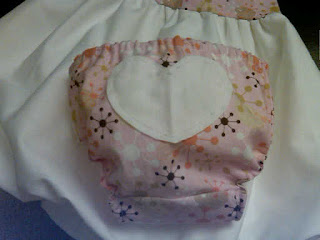 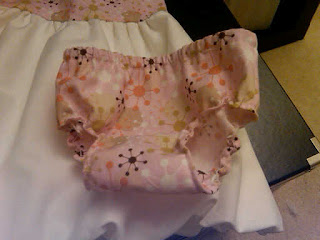 It was super fun to make, though it took me several days to finish (and I didn't have a pattern, so there was a lot of trial and error)... and I loved the end result! I was so stinking excited to give it to my newest little buddy that I even made it in a newborn size so I didn't have to wait to see it on her! (ha ha ha... I'm so lame!)
My only problem with sewing is that I'm end-product focused, so I want to spend all my time working on a project until it's finished. McStudly's usually okay with this because it means more Xbox in it for him, but Austin gets a little lonely and lays at my feet the whole time, sometimes accidentally triggering the motor by laying his head on the foot pedal. Oops!
Anywho - today was a big day. I got a text this morning from Momma Laurie that Baby Abby was wearing a special dress to church. I turned to Studly, who was making molasses yawn with his prep-speed, and told him "You've GOT to get ready. Abby is wearing a special dress today and I HAVE to see it!" Oddly enough, he finished getting ready (though he wasn't exactly moving with a sense of urgency, if you know what I mean), and we headed off to church.
Sure enough she was wearing her little one-of-a-kind dress! Little does she know how much some people (you know... the ones with money to burn) are willing to spend on such a dress... and boy did she work that thang. She was so stinking cute (of course...)!!
Now, you know I couldn't tease you with such a story and not have pictures, so here you go. Lil Abby in her very own SP dress: 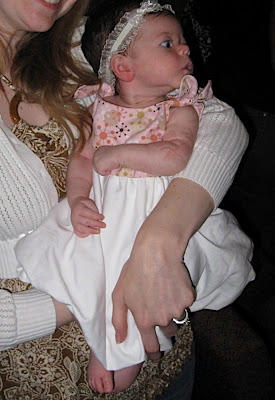 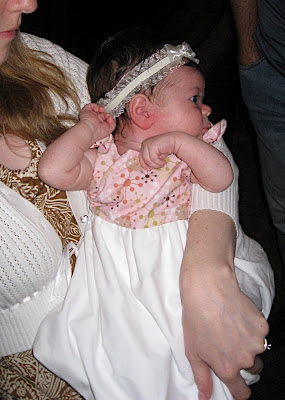 And of course I have a few pictures of us together: 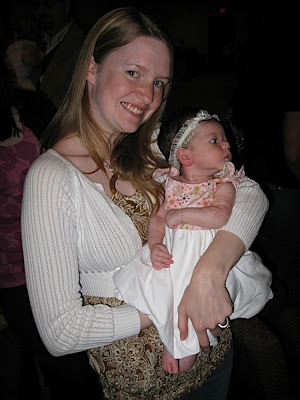 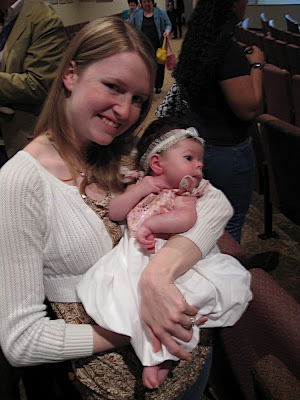 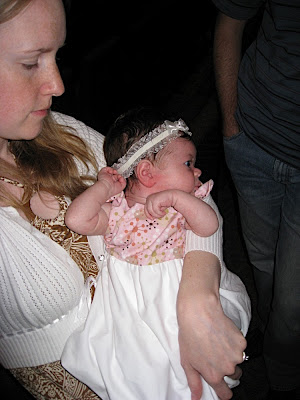 So there you have it. She's just a skosh over 5 weeks old already. Can you believe it?!
PS: Get a load of all that hair!

McStudly got voluntold to do Honor Flight bright and stupid painfully freaking early on a Saturday morning.
If you don't know what honor flight is, here's a small synopsis of what we did that day:
There were several flights arriving at our local airport carrying quite a few war veterans along with their typical plane-load of people. But we weren't there for anyone but the veterans.
At each gate, when the door opened, the normal everyday passengers were the first to deplane. I could tell by many of their faces that they had not-a-clue what was going on as they entered the airport surrounded by lines of men and women in uniform (yes, this happened at every gate where an honor flight was arriving, that day).
Once they cleared out (though some stuck around to see what the hubbub was all about), the veterans began to slowly emerge from the gate, escorted by loved ones and airline staff. And if you weren't paying attention before this point, you most certainly were now!
Roars of applause and cheers greeted them.
The men and women who are currently serving our country were hootin'-n-hollerin' for the men that had gone before them. Shaking their hands. Thanking them for their service. 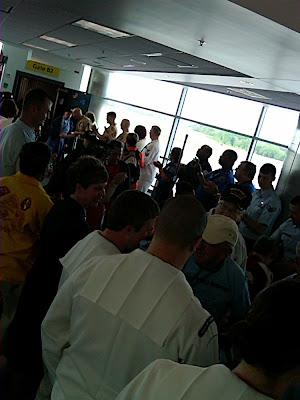 ...and every single one of the veterans were just BEEMING with pride! 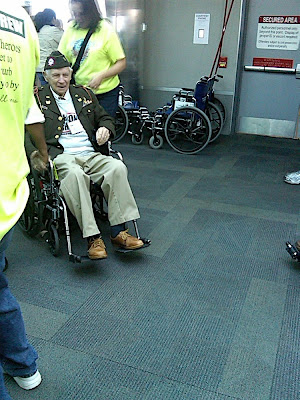 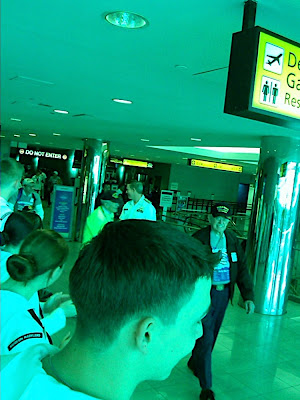 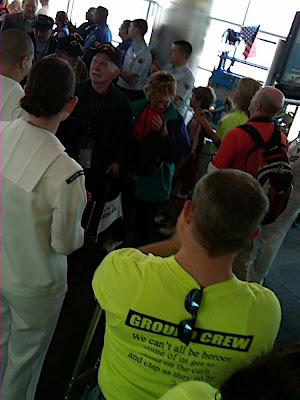 I cannot even begin to tell you how hard it was for me to fight back tears. I was standing next to a pregnant woman, the wife of one of McStudly's pals, and even SHE didn't seem to be struggling as much as I was. Call me a sap all you want, but something about that kind of patriotism just gets me every time.
We had an amazing time. It was SO well worth the early morning we'd had. Seriously.
But even better, for me, was the end of the morning. As the men from the Honor Flights boarded their charter bus to DC, escorted by men on Harleys the entire way there... 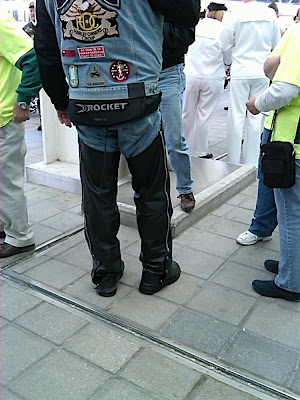 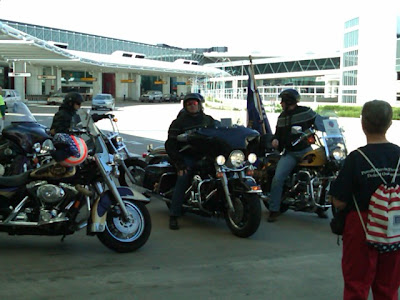 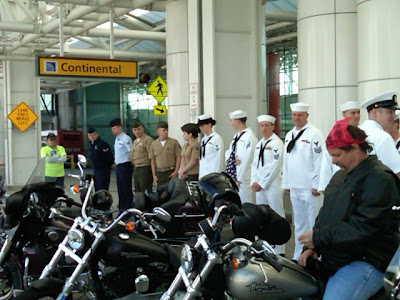 ...all of the men and women that are currently serving sent them off with a proper salute. 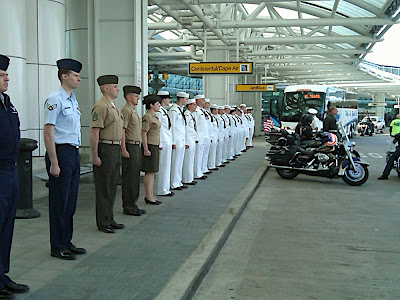 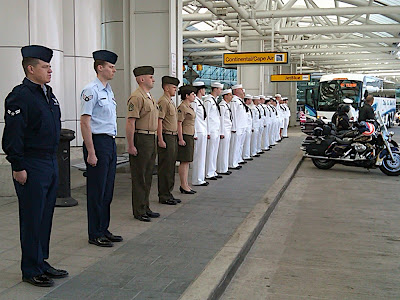 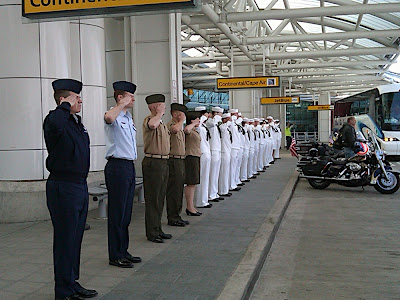 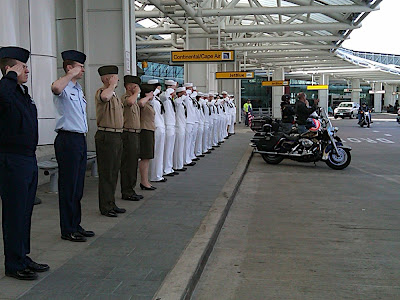 It was so beautiful! If you EVER get the chance to be a part of an Honor Flight near you, DO IT! You'll be so glad that you did and you'll never forget it.

PS: Check this guy out. He still fit into his uniform after 20+ years. 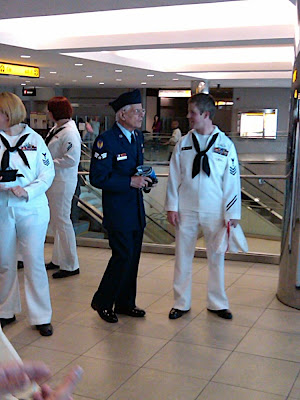 You know I had to get a picture with him and McStudly. Look how handsome! 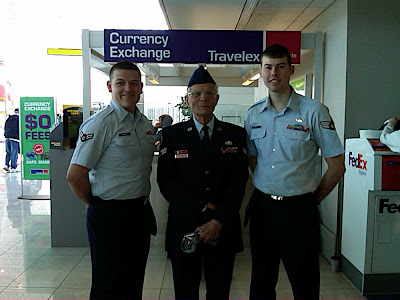 This post is LONG over due, but I just had to update you... a few posts back I mentioned that I was on baby watch. Well, tax day or not she sure made her entrance! 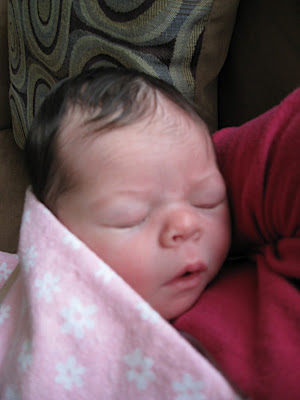 Her momma pushed (yes... just the pushing) for 3 hours. 3 HOURS!! Can you even imagine?! Oof... it makes me tired just thinking about it. But she did SO great and now our pals Laurie and BJ are the proud parents of a beautiful little girl.
She arrived on her own schedule (meaning several weeks past her momma's ideal time, and even 1 week over her due date), but came out with a head full of dark hair (just like her momma) and the cutest little raspy cry you'd ever hear. Seriously, y'all. It's so sad!
But since it's not my story to tell, I'll leave it at that. Their now 3-member family is happy and healthy, and all are doing great.
Now, unfortunately, I don't have any of the pics from our visit to the hospital, but here's a few of when we went to visit them after their first night back home: 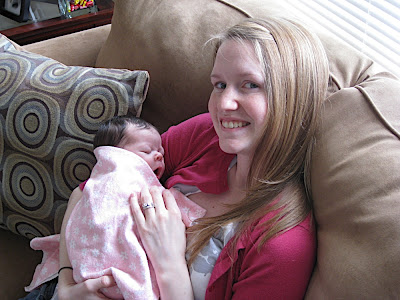 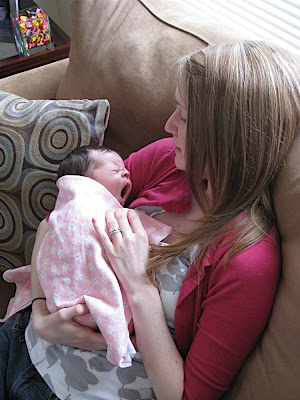 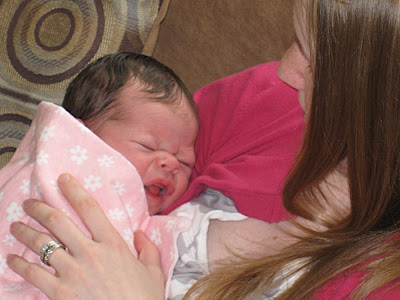 Congrats, guys. We're so happy for you and can't wait to see her grow!!
And just for giggles, here's typical "use" picture... it really doesn't get more accurate than this: 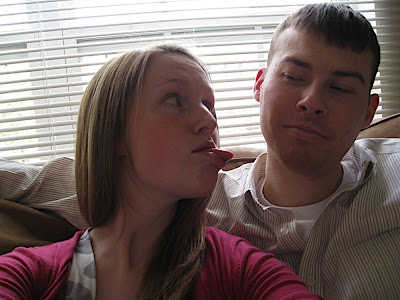 If you don't like it, then DON'T LOOK! Forgive ME for going out of down for a family funeral and not stopping to worry about taking my freaking trash to the dump before I left. I'll try to plan the family deaths around the trash schedule and your preferences next time.
And if you're going to report me to the HOA, don't LIE and tell them that the trash has been outside for 2 weeks, when it'd only actually been out there for 2 DAYS!! Let's face it: You'd either report me for putting it at the curb too early, or apparently you'd report for not putting it out soon enough. Good GRIEF!
Have you stopped to consider that the REASON you're so lonely is because you're so stinking NASTY to anyone and everyone around you that doesn't live to your personal letter of the law?
This is America. A land of freedom. A land where we know we're not perfect, and we don't pretend to be.
So please - dismount and park your high horse somewhere else, because I don't give a rat's vomit about what you think of me. And clearly that feeling is mutual.
If you (and your new redneck friend downstairs) had taken just a moment or two to get to know my husband and I, then you'd know that we'd do anything we can to help you, should you need it. Lord help you if anything should happen and you can't maintain your home (especially if the HOA came-a-knockin'). Or should you get hurt and not be able to do more than yell for help, we're the ones that would hear you.
Have you stopped to think about that? Have you considered that maybe we'd would be better allies than we are the enemies you're making for yourself? No. Of course you haven't. Because that would require you to think about someone other than yourself.
You're an angry old lonely woman, and that won't change until you do. And unfortunately for us all, that will probably never happen.
My suggestion? You don't like it here, then leave. You do like it here? Act like it and quit making everyone around you so miserable. Then... tell your face. Your angry wrinkles are giving you away.
Signed,
Your annoyed and already wanting to move as far as possible neighbors next door. You know - the ones with the dog that poops. *GASP!

Labels: get a life, honesty, how I really feel, mean, moving on, neighbor, our house, stupid old people with nothing better to do, truth, vent

So last Sunday was a blast. A buddy at work had some extra tickets for the Na$car race in D0ver. SO... we jumped at the chance to go. And what made it even better was that it was Baby Sister's birthday, so NATURALLY we invited Bekah, her boyfriend, Sam, and my sista Carlinn (cause we're not blood related... I took out the "er" and made it an "a". See how I did that?! I'm so cool...).
Even though Bekah and I had just gotten back into town LATE Saturday night (more on where from and why later), we woke up bright and early Sunday morning to beat the traffic, get some Sonic for lunch (our stupid state doesn't friggin have any... just the mean commercials!), and then parked in some shady guy's yard and walked through a bunch of trees to find we were still about 5 millions miles from the stadium. *sigh
BUT an adventure it was (that was my Yoda talk. You know you liked it...) and we loved every minute of it.
I have pictures for you, but can't find my camera cord at the moment, so check back sometime soon and I'm sure I'll have them for yous guys.
Anywho - N@scar races are perfect for some PRIME-time people watching. And WOW. WE sure learned a lot more about some of those people than we really wanted to. Basically, I feel like I'm intimately familiar with most of them. *shivers* I'm still trying to recover from some of it...
Go figure - I have what feels like the memory of an 85-year-old woman up until there's something that I WANT to forget. *sigh
Well, I honestly don't know how much I can tell you before I finally upload the pics, so I'll be back to give more deets at some point. Sorry for the lame postage... or should I say the lack thereof?! Like I said - lots to fill you in on.
Until next time, my dearies... Toodles!