A Letter from Nester

He's only 6 years old (yes "He". Compassion had messed up and wrote "she" before, but it has since been corrected) but he's eager to communicate with us.

Yesterday I opened the mailbox to find what I didn't think I'd find for another few years - a letter from Nester. I assumed that due to his young age, he'd be unable to write to us for a little while, but I was wrong. And I'm SO glad that I am!! 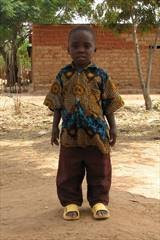 He didn't write the letter, but he told someone what he wanted to say so they could write it for him. AND he drew us a picture! He's such a sweet boy. Most of his letter told me about his parents and his younger sister, Jane. He loves school, especially Math and one other subject that I can't recall, at the moment, and is so happy that we sponsored him. He eagerly awaits a picture of our family, to include our silly dog, and then asked us to pray for him and his family to have "a good life". How sweet is he??

I'm getting ready to write him, again, but this time I'll be doing it by hand, rather than through the internet, as I have been previously. The translator is also trying to help teach us some of their words... next to each thing he drew for us - house, snake, maize plant, table - they wrote the word in their language (I can't recall what it is) and then the English translation underneath.

I'm going to try to find a way to scan the picture he drew so you all can see it. It's proudly displayed on our refrigerator at the moment. :-) I love our little Nester. He's got such a sweet heart and is apparently a very lively 6 year old who loves to laugh and have fun. And ANY 6 year old that likes Math, well he's a hero in my book!

This sounds so fun. I want to do this...Once my life is like...I dunno...calmer, Jordan and I should do it...It'd be fun to get pictures from a little one especially while he's on deployment...

How sweet...that all sounds so fun.