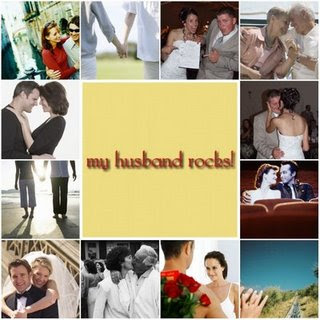 My Husband Rocks. Plain and Simple. I can't really give you details this week, but mainly he rocks because we're learning.
We've only been married for about 15 months, now, and so there's a lot for us to still learn - about each other, about marriage in general, about co-habitating. There's a lot to figure out! So when faced with some of the shenanigans over the past few weeks, he's still trying to learn as we go. Some guys get to a point, or so I've heard, where they think they've got it all figured out. But he's not doing that. He's still learning, and he'll admit it.
We both admit that it's a HUGE learning process, that probably never stops being just that... but at least we're not getting all hopeless about it, right?
He's amazing, and I love him so much. It's amazing to be able to agree with such a cliche, but I truly do love him more and more all the time. It just keeps growing - it's out of control!! ha ha

Labels: day by day, figuring it out, getting along, Growing Up, learning, love, marriage, McStudly, My Husband Rocks

Learning is good...so it patience...it's always about growing :)

I got it in the juniors department at Dillards. You can look on Dillards.com seeing as they don't have Dillards up here!

It is a process, that's for sure. But, it is way worth it!

awwww :) so gald that you're both willing to keep learning!